I took the helicopter photo in my banner above on a day when it was nearly calm at Pt. Diablo just outside the Golden Gate’s north tower. But the strong NW aloft were buffeting the copter and there were strong surface winds inside the Golden Gate off Crissy. This morning a customer mailed me about yesterday’s winds which sound like a similar day.

“Everyone was asking me today why outside the GG bridge was nearly zero, just inside the bridge was solid 25 gusting higher, Anita was gusting to 30. When I went down to Blunt it was much lighter than I was expecting and much lighter than it has been for the past week. I can’t explain it … Would make for some interesting forecast comments and maybe even a blog post. MS”

Here is my response (slightly elaborated for clarity):

I have not forecast since last Friday so I am a bit out of the loop. However, I have seen the pattern you are describing so I can take a somewhat educated guess.

The Marin ridges NW of the Central Bay are one of my favorite for meteorology hikes since I can both see the Central Bay water, feel the nature of the wind above the Bay and, politically incorrectly,  sometimes release Helium filled toy 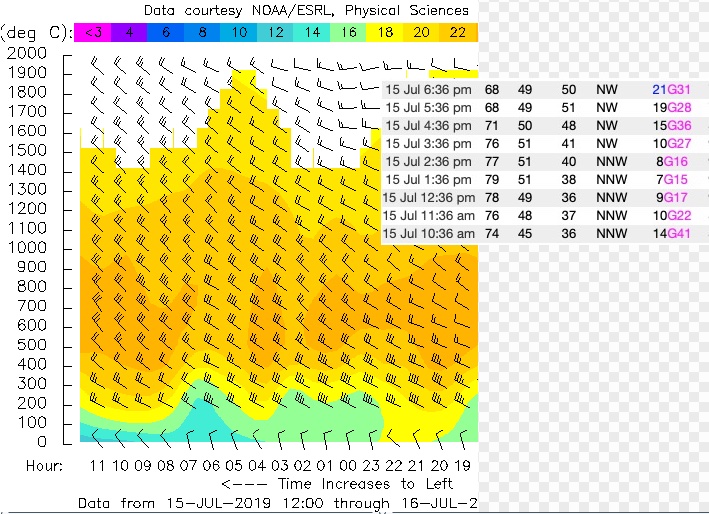 balloons. From the high ridges above the Marin Headland, I could watch the balloons erratic vertical flight pattern as it headed above the Golden Gate.  (in recent years I have done the same in the Hwy. 92 gap trying to understand the SW eddy flow that impacts 3rd…. not much luck there…yet)

The hikes and balloon play suggested the following hypothesis.

This first image shows the 449 Mhz. Bodega profiler from yesterday. Note how Bodega, which is upwind of the Golden Gate,  had very strong WNW to NW wind just aloft from 200 meters to over 1000 meters.

At this elevation these winds would crash into the Marin coast range and which creates a lot of NW to WNW moving turbulent wind that would end up several hundred feet above the Marin Headland and Sausalito hills inbound to the north tower Golden Gate to Point Blunt area.

Now, look at the insert above which shows the Mt. Tam winds yesterday at about 2572 feet.  Since Mt. Tam is way taller than nearby hills you would expect steady winds unless there was turbulence. But the data clearly shows there you can see the Mt. Tam wind is extremely gusty.

Meanwhile, at sea level, you have NW surface wind that is curving in through the Golden Gate as WSW wind at Crissy and to Treasure Island. This is a cool dense wind and as such, it tends to hug the surface of the water. And just above that WSW wind you have turbulent warm air moving from the WNW-NW. What I have observed that when this happens the WSW wind mass is pushed slightly southward leaving a much lighter wind area outside the Golden Gate, near the north tower and near Point Blunt.

A similar pattern happens frequently to Pt. Isabel with strong NW winds aloft and at the surface as you can see in 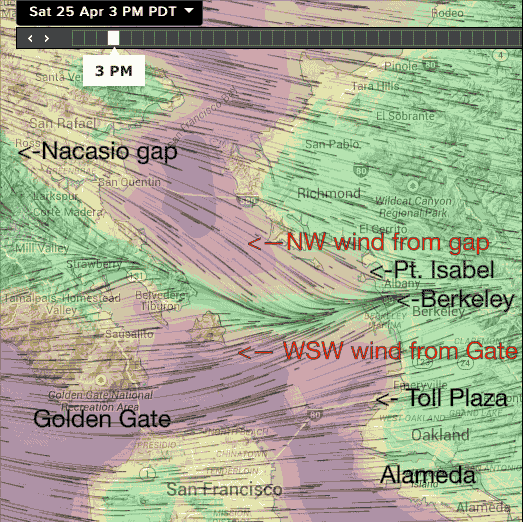 this blog and the following animation.

Looking at the animation notice how the WSW wind inbound from the Golden Gate is diverted away from Pt. Isabel and since Brook’s Island blocks any NW wind people are slogging outside.

So, looking at the animation, mentally just shift that diverting flow over the Central Bay to over the Marin Headland and you can see how that might weaken the Point Blunt,  north tower and winds outside the Golden Gate.

Incidentally, my experience is that the WRF greatly overestimates the impact of this pattern on Treasure Island and somewhat overestimates it for Point Blunt. Tell me what happens today.

This pattern is rarely as pronounced as you describe. But when I think I see this pattern I mention in my forecast something like: “Strong winds inside at Crissy and Treasure Island but fading towards the north tower and Point Blunt”

Let me know if the above makes sense. I will probably do a blog suggesting this as a possible explanation for what people observed. (And here is the promised blog)
Mike