West Coast Wind Blog: Why Ron’s house had 50 mph gusts and lightning flashes at 4 am.

by Mike Godsey, mike AT windsurf.com 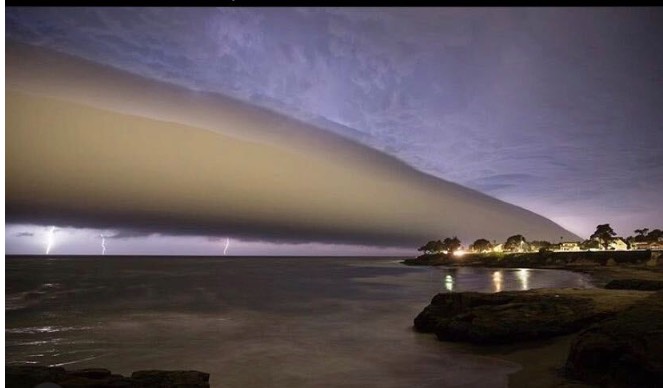 This photo, taken by Jaden Schaul @santacruzfilms, shows roll clouds at the leading edge of thunderstorm and lightning at Santa Cruz last night. The graphic at the end of this blog shows how roll clouds form in thunderstorms.

Long time WeatherFlow customer Ron P. lives in Greenbrae in Marin County just north of the Golden Gate Bridge. On Saturday night, Ron probably went to sleep in Marvelous Marin after a very hot day in normally cool southern Marin County expecting a warm windless night. But  at  4AM  he was awakened by 50 mph gusts and lightning flashes at 4 am and  posted a message on  our  forum  asking, “What  the  heck  was  that?”

Let’s look at the distant and local factors that brought such a powerful T-Storm to the Bay Area.

It all started 1200 miles to the SSW as Tropical Storm Fausto was pumping moisture into the atmosphere.

Meanwhile, a 1500 mile wide upper high pressure at ≈ 18,000 ft. was baking the western USA but also creating strong SSE wind above the tropical storm sending a plume of moist air towards the San Francisco Bay Area. As that plume of moisture hit the California coast range the moist air from the Tropical Storm it ascended and cooled. At a certain point, the moisture reached its dew point temperature and masses of water droplets condensed and created clouds. As the clouds continue to rise in an updraft they cooled, promoting further condensation.

As the elevation of the clouds continued to increase some droplets froze and grew larger as they combined with surrounding water droplets. With time these ice particles became heavy enough to begin to fall through the updraft. The falling ice crystals collided with water droplets and each other, growing in size until they became too heavy for the updraft to hold them. Then they fell through the cloud, creating static electricity.

Once those electrical charges became strong enough, lightning could form within the cloud and even hit the ground near Ron’s house. As you can see from the animation, that plume of moist air was hitting the Bay Area before dawn and continued to create convective storms even mid-morning.  The last graphic shows this process in one thunderstorm. Ron’s house was probably on the edge of the storm, hence thunder but no rain. 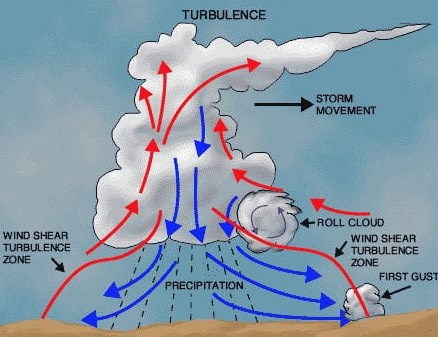