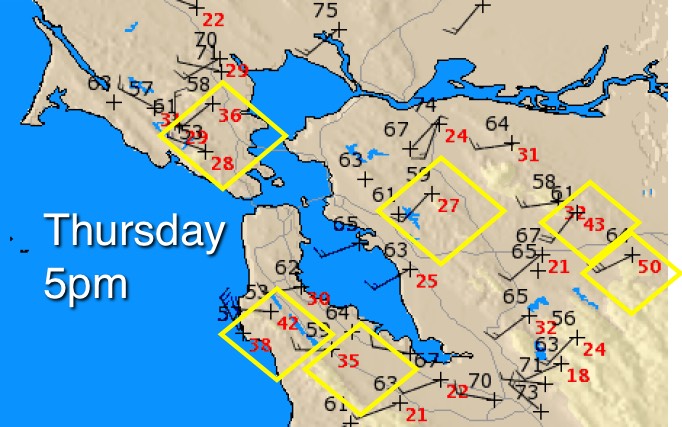 The answer is way aloft!

In yesterday’s blog I talked about why I expected strong NW wind on the Northern California coast today as the North Pacific High was nudged closer to the California coast. At the time I suggested that the winds might be unreliable at some sites and today I added This phrasing “A combo of strong NW surface winds

and a mixture of NW and SW wind aloft will make for SHIFTY, GUSTY and for some sites UNRELIABLE wind.”  Plus warnings like this “Due to Gusts, Lulls and Shifts near shore use caution when launching!”

So why the purple prose? First let’s look at this animation.

In the first part of the animation notice the strong surface winds from the North Pacific High which is centered way out in the Pacific.

Still looking at the first part of the animation note the strong winds heading across California towards the Great Basin.

Also note who these winds
curve as they go over the Bay Area. The exact location of that curve in the wind is not modeled very well even in the highest resolution models. And if that curve occurs near Coyote and 3rd. Ave. the winds could go from WNW to an unfavorable W.

Now watch the 2nd. part of the animation which shows the winds at ≈ 18,000 ft. These winds comprise an upper trough that is in the process of turning into a Cut-Off Low.

Often we associate Cut-Off Lows as creating southerly winds aloft for the Bay Area. But this one is mostly north of us so we see strong WNW to SW winds aloft. The peak winds are in red and are in the 70 knot range.

Right now it looks like the portion of the Cut-Off Low with SW winds is directly over the Bay Area.

Look at the map of the Bay Area above and you can see strong NW wind on Mt. Tam in Marin but gusts to 47 knots on East Bay hilltops.

The Bodega profiler image shows the very strong NW winds aloft. So that curve will not be an issue for the coast.

The last image shows the amazing strong pressure gradient to various points in the Great Basin.

This pressure gradient guarantees strong surface winds but the winds aloft make it gusty, shifty and possibly unreliable at sites like Berkeley, Treasure Island and Coyote and 3rd. Ave.