Each year, I enjoy finding out when the Cannonball Jellyfish arrive in the Charleston, SC area.  Other than being a delicacy sushi grade for Asian countries… or another one of those things that go “bump” in our dark murky waters (but don’t worry – they don’t sting), they signify a couple of things for us as wind/weather forecasters from a hydrological and meteorological aspect:

1. Nature vs. technology….they let us know that Sea Surface Temps have started to reach upper 60s’ and continue until we see mid to upper 70’s where they thin out as temps rise into the 80’s. Many times they let us know before our most sophisticated satellites can detect the slightest difference of just a few degrees water surface temperature change. They thrive in upper 60’s to middle 70’s temps –  ideally 73.6° with an average salinity of 33.8 parts per thousand.
2. For wind forecasting, this is significant for surface winds to begin partially to fully coupling with the beaches at the land and sea interface. Our residual cooler shelf waters from winter retain a more stable environment just along the surface during warm air temperature events, so winds can be very fickle and difficult to predict. This arrival shows us that true Bermuda High setups are beginning…and that our stronger Southerly Sea Breeze events will be starting very soon as water temps continue to warm up. In other words…it is a turning point for our warmer weather wind pattern in the Southeast.

Current Sea Surface Temp taken from the Charleston Harbor (and during a Neap Tide): ~65.5° 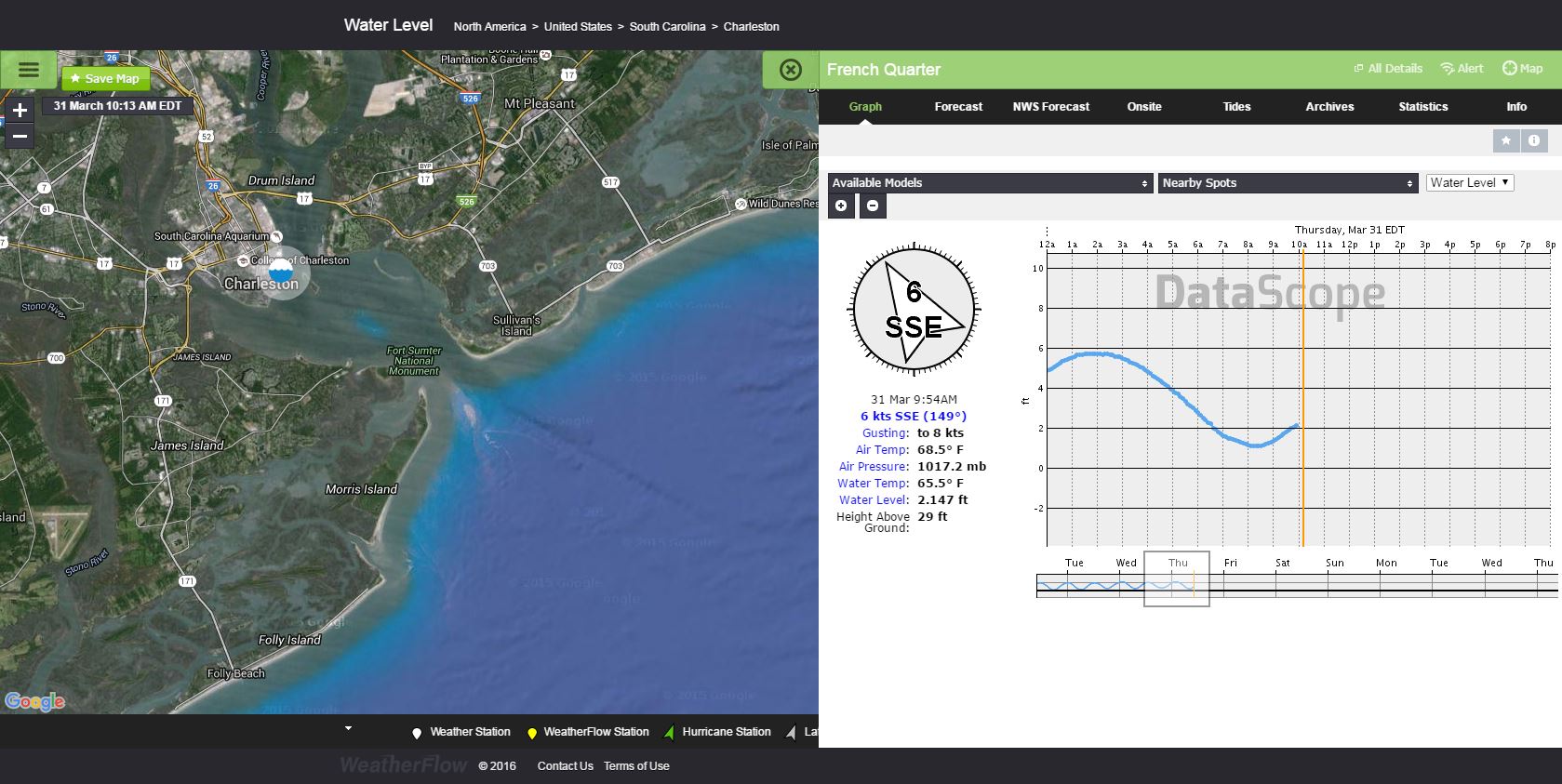 For historical purposes and for our archives, let’s look at when the last 2 arrivals were:

After requesting for pictures to be sent from locals when seen, a Charleston, SC local named Laura Pavlides sent the following tweet: 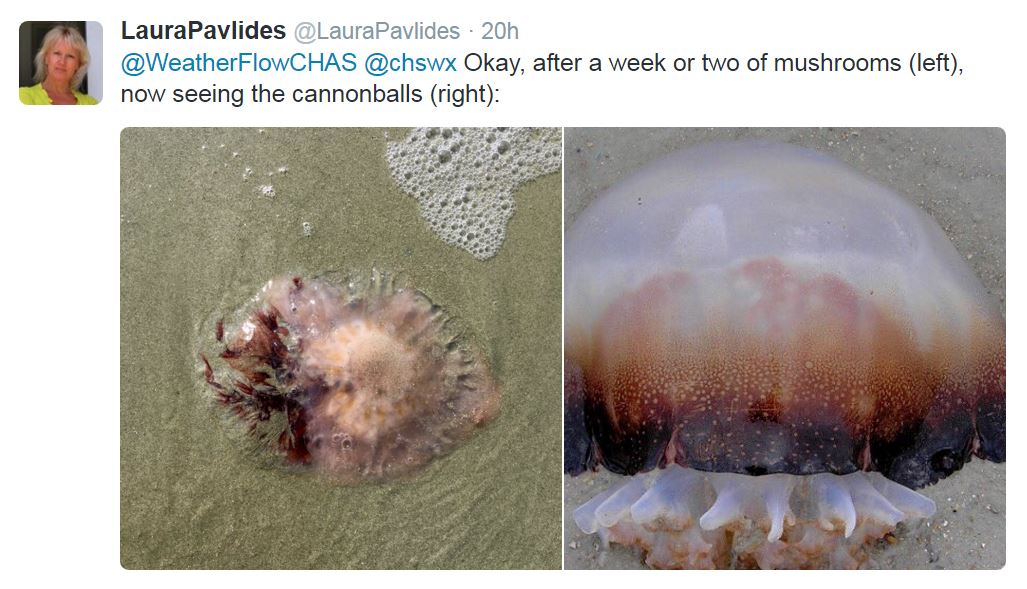 Thanks for the pics and the tag on Twitter, Laura!

So now we might be able to add another species of jellyfish to this mix to show when low 60’s Sea Surface Temps have arrived – the “Mushroom Jelly”. I noticed the same thing early last week, specifically Tuesday, March 22 while kiteboarding out over the water. I spotted about 3 Cannonball jellies. They then disappeared the following several days with the return of cooler waters…and have just now come back with the next warmer water surge. Usually they start out rather sparse and lonely looking… and then grow in population when we get into the low to mid 70’s.. Then they tend to fade out when we hit upper 70’s and surge into the much warmer 80’s.

Here is a current YouTube loop of the NASA Sport Sea Surface Temps from March 10 – March 30. Notice the first small surge to mid 60’s (hence the first arrival of the Cannonballers) cools back down to low 60’s and then comes back even stronger these past 4 days:

Wind statistics from Isle of Palms from March 2014 and March 2015 daytime only. Notice the upwards trend.

So what we know is that our Sea Surface temps warmed to mid/upper 60’s faster this year than 2014 and 2015…and even though our NE wind events are more dominant during this part of the year, what is suggested from daily obs and forecasting is that our Southerly Sea Breezes have been generally stronger than the last 2 years –  specifically along the barrier island beaches (will upload the March 2016 stats once available).  We have not seen quite as many fogging or marine layering events this March to cut off or decouple winds along the beaches. 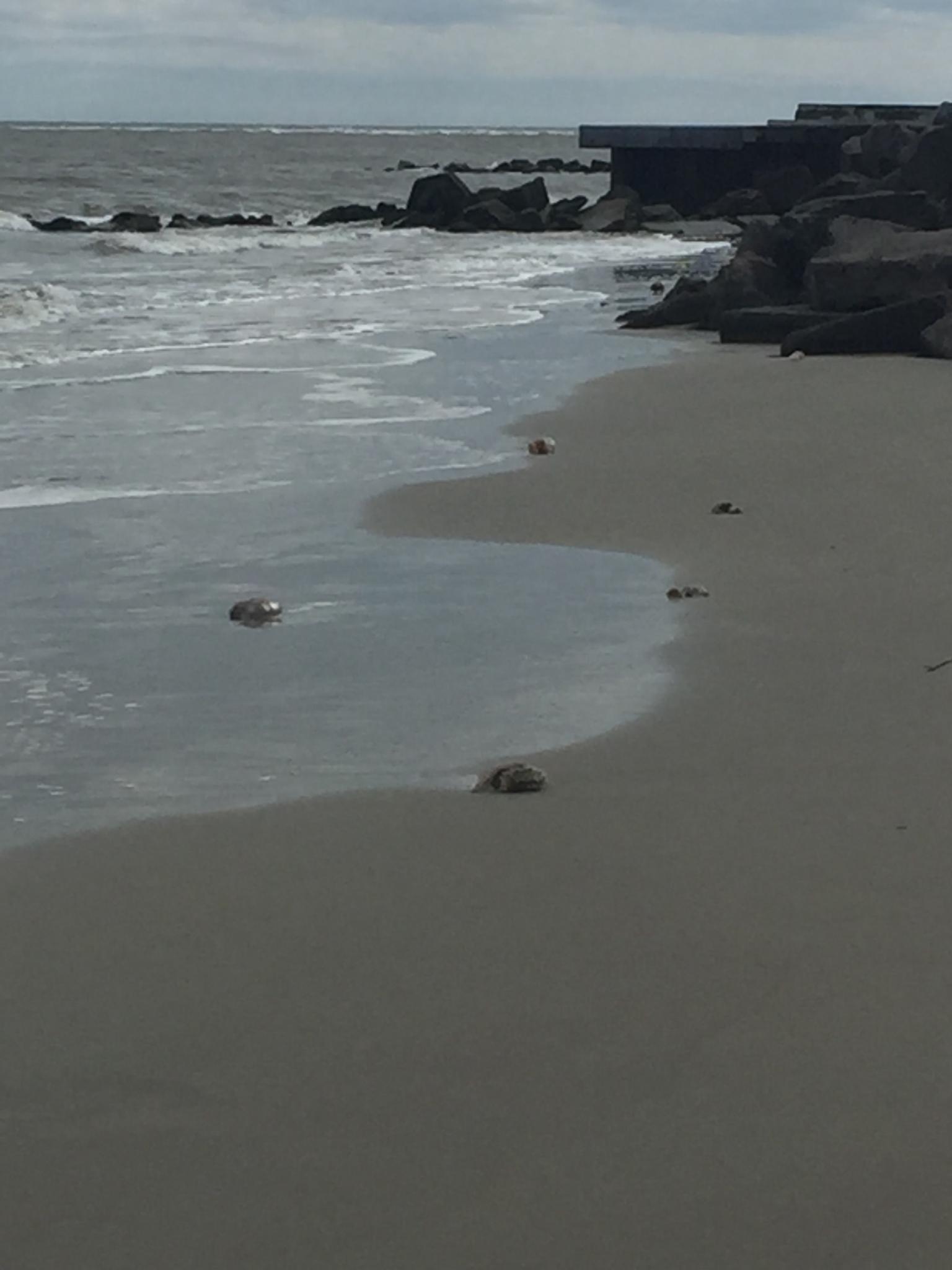