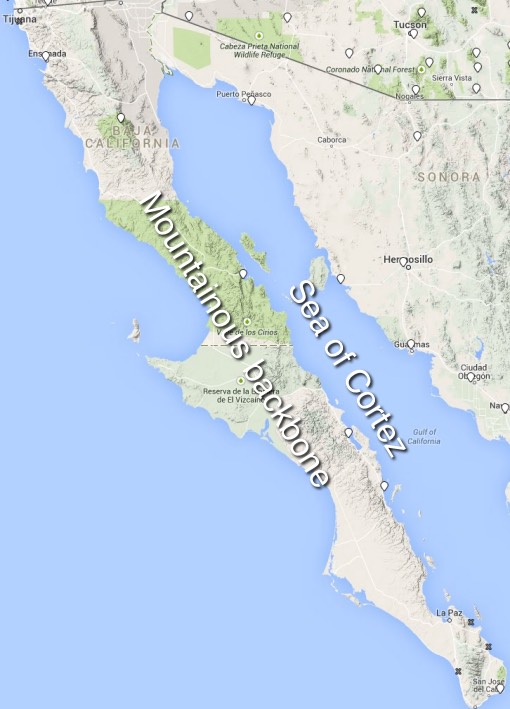 Only a few small towns dot its length except for the extreme north and south ends.

On the eastern side of Baja is the warm to hot Sea of Cortez. On the western side is the cold Pacific Ocean. Towards the south end of Baja is the area known as the East Cape where the famous windsurfing and kitesurfing areas of La Ventana and Los Barriles are located.

4. North Pacific High’s surface NW winds coming over from the Pacific. (add a gust/shift factor and sometimes push the El Norte wind away from shore.

5. Strong N. wind from an unusually locat North Pacific High. This is rare but happened frequently during the winter of 2021/2022

These winds are created by the pressure gradient from a weak to strong high-pressure area in the 4 corners and/or Great Basin and lower pressure south of Baja.

This high pressure typically develops after a storm system passes over California.

If there is not another system inbound then the North Pacific High slides up the California coast. A day later a ridge frequently extends from the NPH over the Pacific Northwest and far Northern California.

Then if conditions are right this ridge evolves into a separate high-pressure area over the Great Basin. The strongest El Norte winds occur when the high pressure is centered over the 4 corners. (where all the square states meet) part of the southern Great Basin.

Watching the timeline in this animation you can see this happening in an early season mild El Norte event.

Watch as the NPH extends a ridge and high pressure develops over the Great Basin.

Once this happens notice how the isobars stack up over the Sea of Cortez.

The ideal location for strong El Norte winds in Baja is for the high pressure to be centered over the 4 corners area.

This high pressure is typically develops overnight and is strongest in the after-midnight hours.

In a strong El Norte the Sea of Cortez winds abruptly the winds ramp up to the 20-40 knot range after midnight and big surf awakens people from their sleep.

These winds are strongest far from shore but move towards shore as in the inland valley’s heat. If there are any clouds, especially inland, the El Norte winds are weak at the shore and mostly outside.

The next animation shows the wind flow pattern that resulted on this particular day.

Also, notice how this creates weak Santa Ana type offshore winds in Southern California. There may also be “Diablo” winds in the S. F. Bay Area and strong E. winds in the western Gorge.

But a combo of the Baja Peninsula’s mountainous backbone and the subtropical low pressure to the south concentrate and funnel these winds and the resulting swell down the 700-mile fetch of the Sea of Cortez towards Baja’s East Cape.

In Baja, these northerly winds are known as the El Norte winds. And in hours they can turn a mirror calm Sea of Cortez into a  heaving mass of big swell and strong winds.

Since these winds can develop so rapidly it is still common for unsuspecting fisherman to lose their lives to these winds.

The local sea breezes on Baja’s East Cape are mild extremely localized winds and are useful for kiteboarders and windsurfers at only a few sites in along the Sea of Cortez. In the early days of windsurfing, people camped at over a dozen different sites from Bahia de Los Angles to Cabo Pulmo. Gradually they learned that most of these sites only blew in strong El Norte events since they lacked significant local sea breezes.

Gradually windsurfing concentrated at first at Los Barriles and later at La Ventana since only these sites have the prerequisite topography to generate local sea breezes above 10 knots.

La Ventana has the perfect setup for local sea breezes and a less perfect setup for El Norte winds. This means on big El Norte days it is a bit less windy and has a bit smaller swell than Los Barriles since it is partially inside a bay unless you go a mile or more from shore. But when the El Norte winds are weak they combine with local sea breezes to create wind that often reaches the 15-18 knot range.

So when someone asks which site, La Ventana or Los Barriles, has better winds… The answer depends upon the relative contribution of local sea breezes and El Norte winds on a given day.

So using the graphic below let’s look at La Ventana and Los Barriles and their local sea breezes and how they interact with the El Norte and the North Pacific High’s surface NW winds.

First, let’s zoom into Baja’s East Cape remembering that there may be weak to strong El Norte winds coming down the Sea of Cortez.

Find La Ventana and Los Barriles and notice how Los Barriles is more exposed to the NNE El Norte winds while La Ventana is partially tucked into a bay and the wind shadow of Isla Cerralvo.

Now let’s zoom in some more. Comparing La Ventana, on the left, notice how it only receives weaker El Norte winds compared to Los Barriles. Now focus on the inland valleys to the south of both locations. Notice how the Los Planes valley south of La Ventana is very flat and surrounded by mountains.

In the morning in La Ventana, if there is NO El Norte the waters are typically glassy calm. Or if there is a weak El Norte it will be glassy for the first several miles near shore with distant white caps from the El Norte winds. As the Los Planes valley warms up, assuming there are few or no clouds, the air near the land’s surface warms and expands creating a thermal low-pressure area. This causes a local sea breeze front to develop to the north which first hits El Sargento and then arrives at La Ventana. You can see this front as a dark line in the photo.

A similar process happens at Los Barriles. However, as you can see the valley south of Los Barriles is open to the south so the thermal low can expand towards Los Cabos making the temps there warmer but weakening the Los Barriles pressure gradient. Hence weaker local sea breezes.

4. The effect of the North Pacific High’s surface NW winds on the El Norte winds

The El Norte winds in the early morning are fairly steady winds but as the day progresses they sometimes become very gusty or shifty or very weak near shore. This is especially true at La Ventana and especially at El Sargento north of La Ventana. While Los Barriles typically has steadier winds during a strong El Norte.

The animation below shows why this happens. Notice in the left image at 8AM the El Norte winds flow smoothly down the Sea of Cortez. If the North Pacific High and its NW winds are far from Baja this smooth flow continues through the afternoon. So the El Norte winds are steady and close to shore while the big swell is smooth and starts only a few hundred yards from shore.

However, if the North Pacific High’s NW winds are close to the Pacific side, as in this animation, there is a problem. As the interior of Baja heats up the NPH’s NW winds are sucked through gaps in the mountains of Baja. Looking at the 3PM image you can see this happening. This NW flow from the Pacific tends to push the El Norte winds further from shore.  This NW wind is turbulent so the El Norte winds seem gusty and shifty as the 2 winds interact. This NW flow also causes a small cross-chop to develop over the normally big smooth El Norte swell. Even without computer models, you can anticipate this effect.

El Sargento is very exposed to this effect while nearby mountains protect Los Barriles. La Ventana, being further from the mountains sees this effect as WNW winds blow down the arroyo in random bursts using the N. winds away from shore. In the morning look to the north and if you see any clouds streaming from the NW rather than the North be ready for a difficult day. This is especially true if you see nearby flags sometimes switch from N. to WNW.