In Part I, we discussed the general understanding of how Sea Breezes work. In Part II, we looked at the different classifications of Sea Breezes and how each one works. Now, in Part III, we move on to more advanced parts of the Sea Breeze. We’ll take a look at how it forms, how it affects the coast and the effects it has to areas well inland.

The question still remains…“What does the Sea Breeze look like?”

In this part of the series, I will present the anatomy of what the Sea Breeze and its components would look like if viewing from the side –  and how each part of the system works.

Let’s start off by saying that the Sea Breeze System (SBS) is mainly a vertically rotating mesoscale cell – what I like to call the “atmospheric wind wheel”. In some cases as we discussed with the Backdoor Sea Breeze – a vertically oscillating front, but we’ll stick with the main types for this part. ( See Backdoor Sea breezes along the SC Coast for that one )

As a recap, here is another look at how circulation it is viewed from the side: 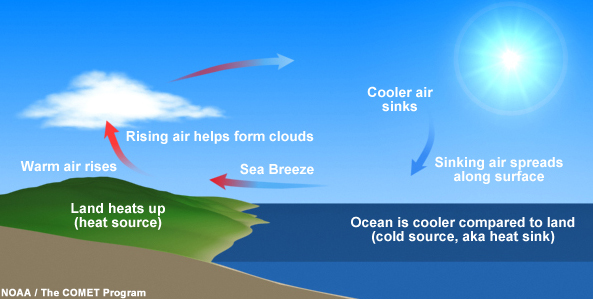 ONE POINT TO BE MADE for formation of Sea Breezes:

The formation of the Sea Breeze System is initiated by the temperature differences between cooler sea surfaces and the warmer land. As the difference increases during the day, a pressure gradient is produced at low levels, which initiates the sea breeze near Earth’s surface. This is known as the mesoscale Pressure Gradient Force (PGF) that pretty much is the driving mechanism for the system. First we must look at how Sound Waves develop this PGF.

Sound Waves (Compression Waves) – The picture below shows an Eastward propagation, but keep in mind the direction of propagation is inland to the West along the SC coast.

There are 3 theories on how sound waves commence the Pressure Gradient Force :

Here is a wind graph from the Fort Sumter Front Range Light in the Charleston Harbor, where we can see the night time inversion burning off and the initial thermally capped Sea Breeze head pushed ashore and through the harbor around 9:00 AM. (In some cases, this can become a small, clear undular bore as the SB head breaks off and propagates inland away from the cooler air behind it.) Afterwards, we can see where the typical Sea Breeze build re-started and progressively increased through the afternoon.

These graphs were from the Fort Sumter Front Range Light in the Charleston Harbor.

Or…could it be that the Sea Breeze front is receding and the head passes through that area just at that time… and then meanders back off the coast to regroup? That’s a question yet to be answered.

On to the next portion where we analyze the structure of the Sea Breeze. 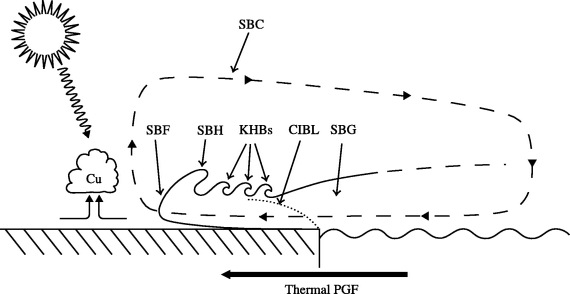 1.  (SBC) Sea Breeze Circulation is a vertically rotating mesoscale cell – or what I like to call an atmospheric wind wheel. It has onshore flow near Earth’s surface, rising air parcels inland called thermals, and a return flow back out over the ocean to repeat the cycle – which can become faster and faster as the day progresses for the stronger Sea Breezes.

2.  (SBF) Sea Breeze Front is the frontal surge of the SBG nudging the SBC onto land and commencing the event. Noticed are changes in air temps, wind directions and relative humidity. The coast tends to dry out, winds are registered along the coastal mesonets during the turn and fair weather or cumulus cloud build-up’s are visible in the sky.

3.  (SBH) Sea Breeze Head is right behind the SBF and is the landward forcing mechanism to overtake the air ahead of it.  It tends to be very tall in height with a sharp drop-off just along the crest.

4.  (KHB’s) Kelvin-Helmholtz Billows are unstable waves that form right behind the head and along the upper boundary of the SBG during peak heating initiations.

5.  (CIBL) Convective Internal Boundary Layer is an unstable area just behind the KHB’s and just ahead of the SBG. This area is where the more consistent winds flow horizontally along the surface. Gusty and more turbulent winds exist inland…where these winds lay down as a steady inflow off the ocean.

6.  (SBG) Sea Breeze Gravity current is the cooled, moist marine air in the aft area of the SBC that is a product of return flow from High pressure aloft. This is where the faster rate of sinking air from High pressure aloft can cause the SBG to inject or wedge this cool moist air into the CIBL and ultimately further forward for the thermal lifting to take place.

Kelvin Helmholtz instabilities initiate from limited static stability (where low level moisture meets warmer land) and develop turbulent vortices behind the SBH. This creates the Kelvin Helmholtz billows (KHB’s), which grow in height, fall back and disperse along the density interface.  Basically, this area of the SBC is very unstable and shows UP’s and DOWN’s at the surface sensors until the front pushes further inland.

Behind the KHB’s is the Convective Internal Boundary Layer …or CIBL.  This is where winds develop along the beaches and builds for the day. This area expands as the head and KHB’s press inland. The SBG remains just offshore or just above the CIBL along the beaches during weakening phases …or at times during True Sea Breezing with a weaker synoptic setup.

Meteorologist J.E. Simpson created a shadowgraph laboratory generated gravity current. Pure water is on the left, and slightly salty (denser) water enters from the right. Visible in the photograph are the current’s nose (slightly elevated leading edge), raised head, and trailing Kelvin-Helmholtz billows (as described in text).  This is a pretty good idea of what our Sea Breeze would look like as fluids mix – same principle in the atmosphere. 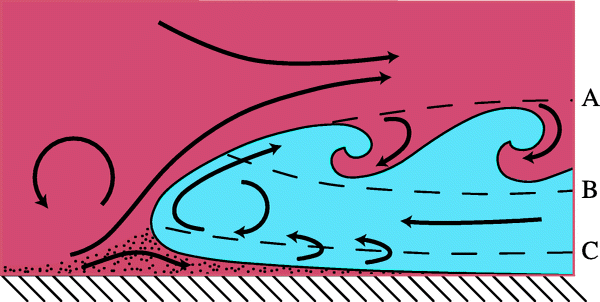 Here are three other types of gravity current renditions that show alternative variations of the Sea Breezes, where the “floor speed” represents the surface flow and the “opposing flow” is the opposing land breezes/wind aloft (or shear factor).

You can see the last one is a fairly strong setup and the CIBL is more structured with a stronger sustained flow. The SBG has a wider wedge of return flow circulating back in from behind. This one is more likely to break off at the head at the end of its diurnal cycle as its pushes further inland, leaving the rest of it behind to steadily die off. 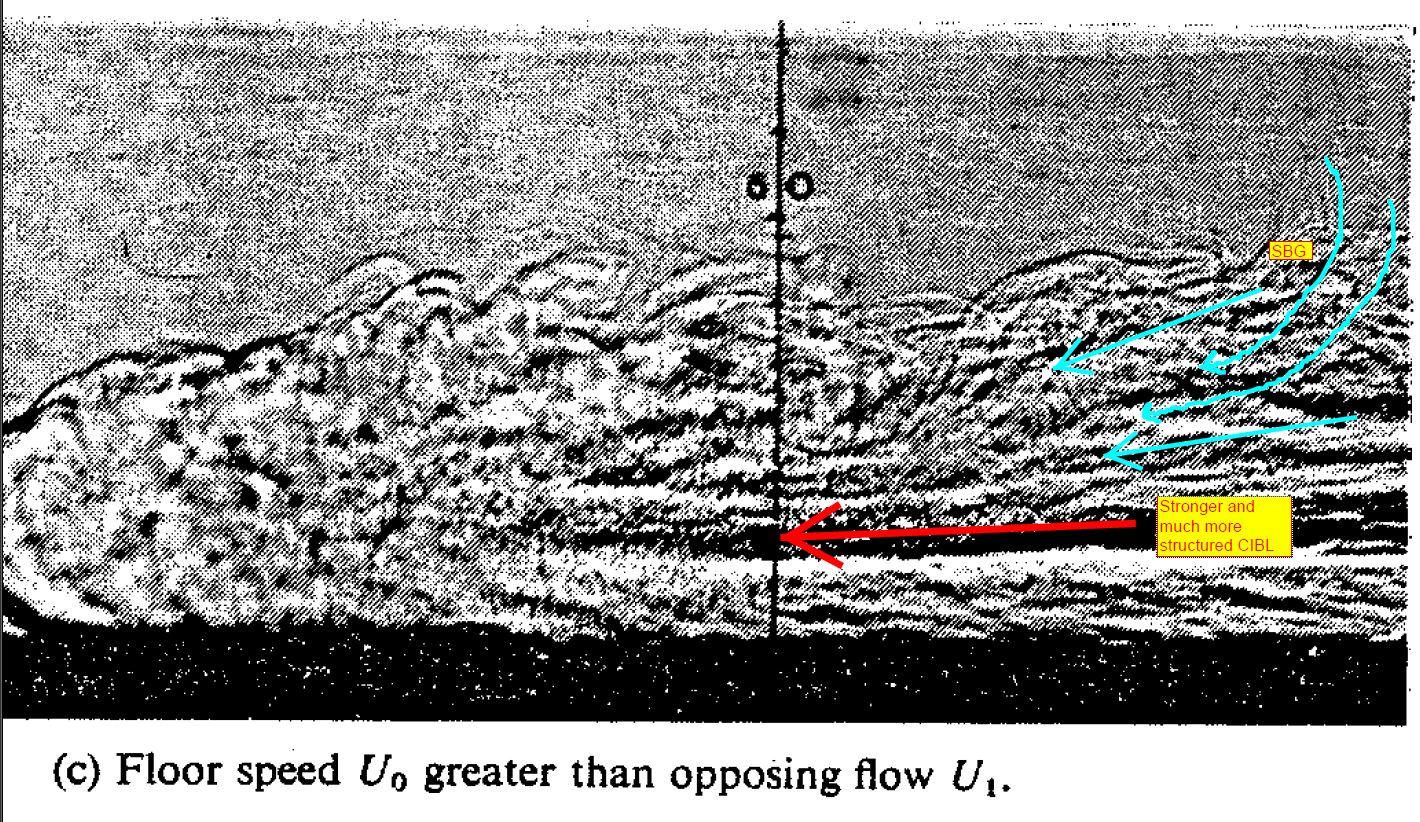 The Sea Breeze is really a type of a buoyantly driven gravity current.  Thus, if we take a “haboob” or a “sand storm”, we can see how this current operates. In short, if we could see a Sea Breeze coming ashore, it would look something like this, but much, much slower in advancement.

The technical reason why is because they both have the same frontal head shape, KHB’s behind it…and a buoyancy driven gravity current sustaining speeds along the aft circulation. Of course, the back end is not over cooler water for the SBG circulations to remain sustained, but you get the idea.

Forecasting Sea Breezes is a common problem for forecasters along the coast. In order to dedicate time and effort on the main focus, three main elements are to be considered:

These Sea Breeze fronts have been know to push pretty far inland- upwards of 100 miles in the Southeast at times. The storm lines can become very thick and violent at times, especially when Urban Heating adds to the downwind effects. Most of the time, they will stick within 15-30 miles, where the convergence zone from inland activity keeps it actively fed along that convective line and keeps the front contained closer to the coast. Topography plays into this significantly as upsloping and downsloping factors shift weight with the respective gravitational influences.  This explains why storms surge towards the coast in the late afternoon over the flatter lands and never quite make it – rather they get sheared off up top and fan out their higher cumulonimbus stacks out over the ocean with out any storming.  This brings up a good point about the convergence zone inland. Sometimes the storms do break through and advance towards the coast. This can be from a couple of reasons…

Here is a good example where the fronts along Southeast NC and parts of SC/GA showed the Sea Breeze “losing their heads” and propagating inland as gust fronts (likely as an undular bore).

Here’s what is going on here… 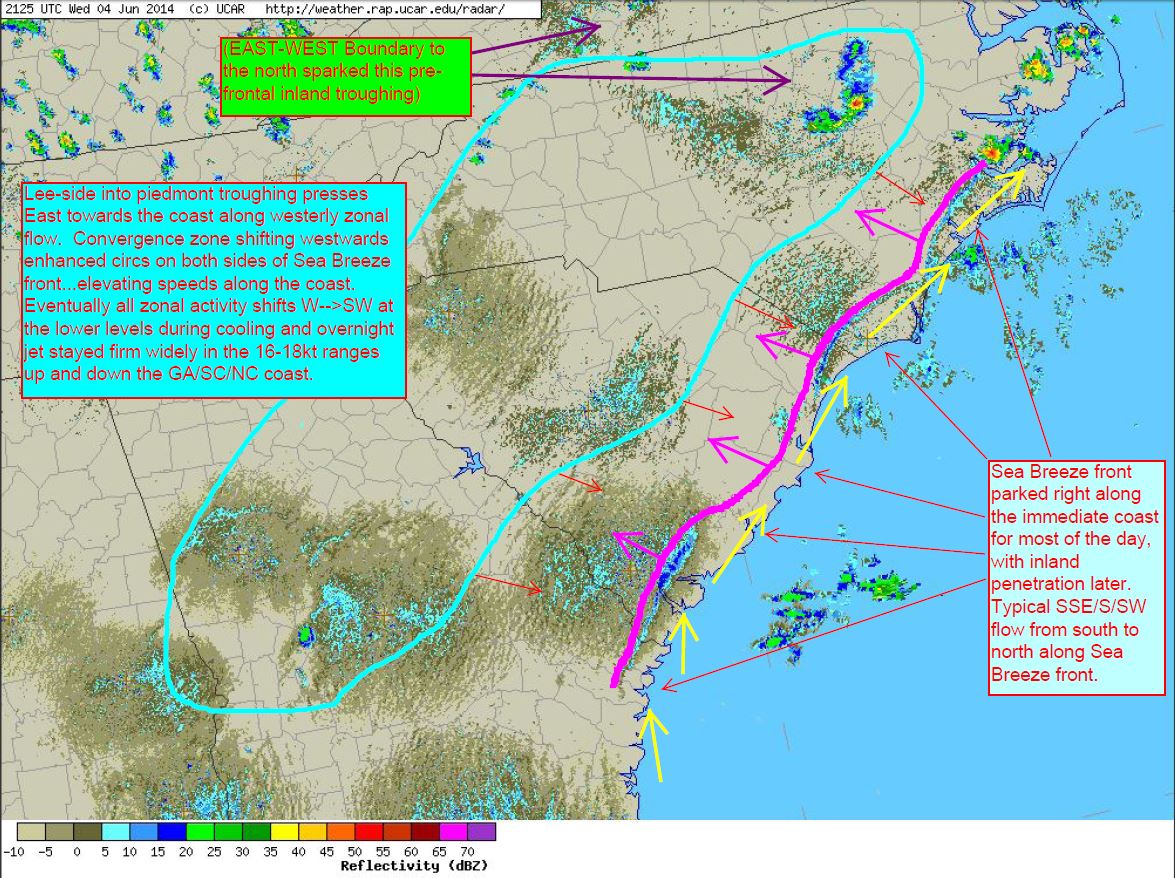 Forecasting Sea Breezes is a common problem for forecasters along the coast. In order to dedicate time and effort on the main focus, three main elements are to be considered:

With the current WeatherFlow mesonet increasing along the SC coast, we are able to “see” these occurrences more and more…and are becoming more equipped for predicting the weaker vs stronger Sea Breezes during the warmer months. We are even finding out that they occur in the winter – including with absence of cold front approach.  We are continuing to expand our coastal mesonets in other parts of the country as well, so we hope to find out even more about our fragile land-and-sea environments.

This ends the three part series of the article…but I am expecting that the ever changing science of Sea Breeze forecasting may prompt further investigations.  Until then…stay safe and stay alert out there on the water!