El Niño Wind Prediction for the US East Coast.

What is El Niño and how will it affect our East Coast wind pattern?

El Niño is basically the warming of the equatorial Pacific. Specifically for the effects it causes us in the United States, it’s the warming of water surface temps above normal along the eastern Equatorial Pacific. The higher sea surface temperatures indicate a warmer climate for the SW United Stated as this warmer surface air surges northwards away from the equator.  Historically, this also causes the eastern half of the United States to show wetter and cooler winters overall. This particularly strong El Niño phase is expected to peak late fall 2015/early winter 2016 as Sea Surface temps climb nearly 3.6 degrees above normal.  Then it could start phasing downwards into the Spring 2016.

All of this warm air bulging into the SW and NW United States creates the setup for the polar jet stream to repeatedly dip down into the Midwest to East Coast. Add a warm blob of warmer waters just south of Alaska…called “The Blob” in the meteorology world…and the pattern intensifies the downward slope into the eastern half of the United States.  We can also say that strong western Pacific Cyclones/Typhoons getting swept up into the North Pacific Jet (that eventually joins the North American polar jet) shows additional surges of energy for these dips in the polar jet to increase in strength over the US.  We call this “teleconnection” when we see these types of connections span across the globe – just as some of our powerful Nor’easters rip across the northern Atlantic and  bomb out for a second time over Europe to bring high winds and huge wave action there. 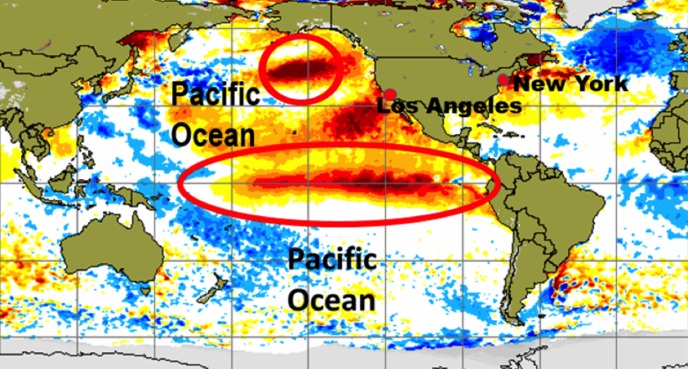 Here is the chart used for detecting changes in zones. Nino 3.4 and Nino 3 are the ones closer to the United States. The Nino 3.4 is the one more emphasis is given to:

According to the latest ENSO (El Niño Southern Oscillation) diagnostic discussion from NOAA, this event could peak +2° during a 3 month period in the eastern Pacific as of their mid-September findings – specifically in the Index Nino 3.4 region…and is already showing and upwards trend towards 2° .  Notice the other two data sets provided from the 2 past events from 1982 and 1997. 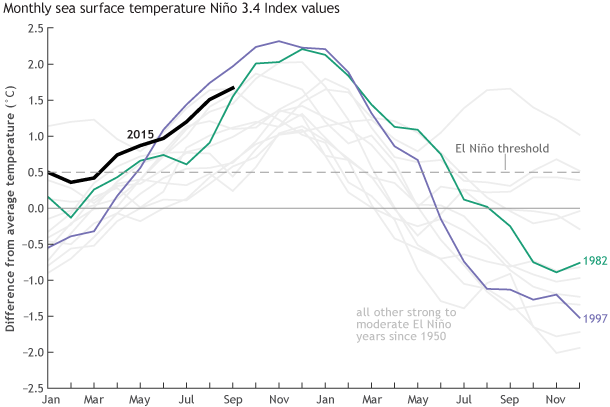 Here are the detailed prediction models (temps above normal up the left side and along the bottom months are done in sets of three: JJA= June/July/August, SON = Sept/October/November, etc…) – highest being “NDJ” (Nov/Dec/Jan).

The pattern to expect from past research on El Niño events is a colder and wetter winter for the Deep South and mainly wetter for the East Coast. Here are the latest NOAA outlooks as of October 15, 2015. 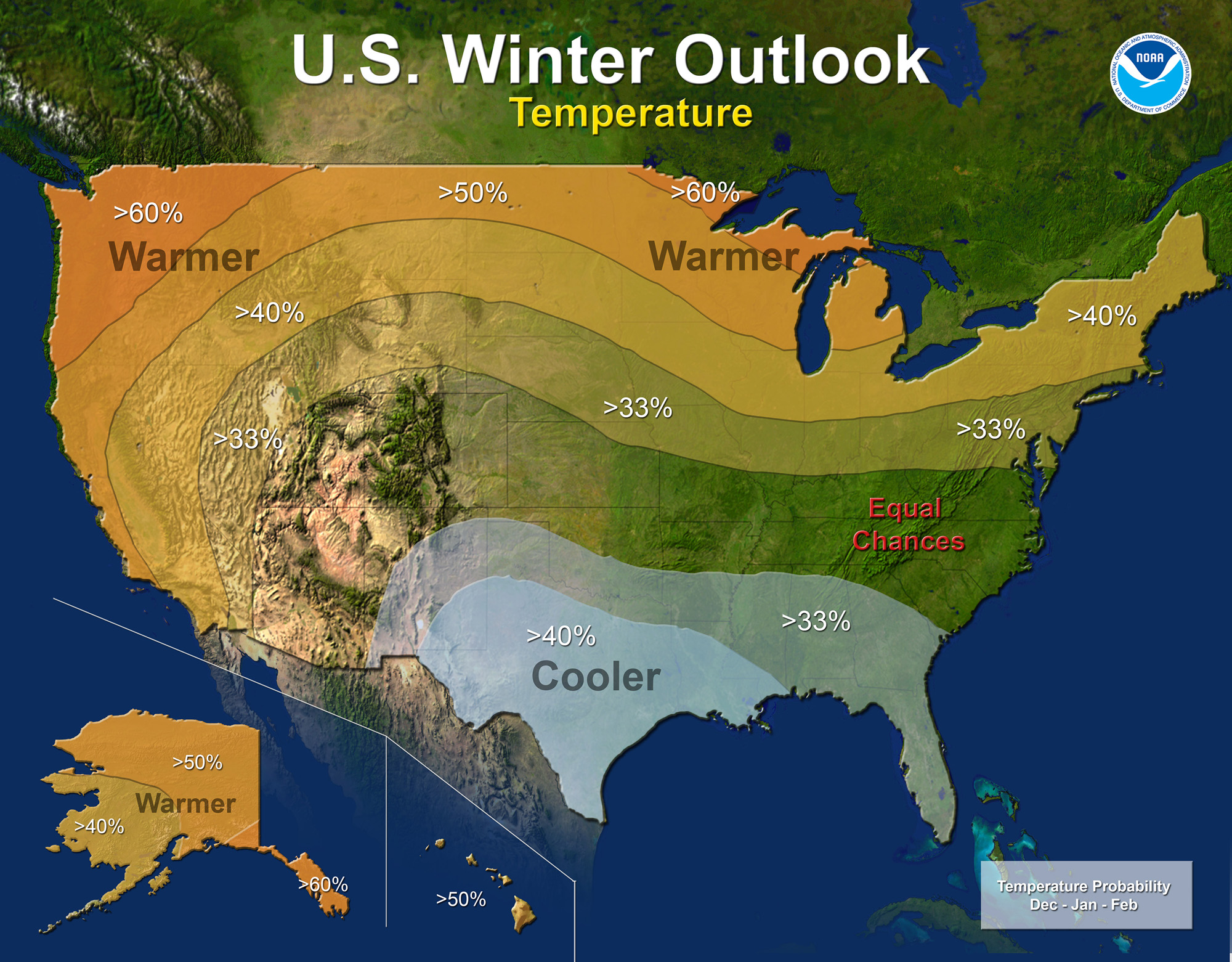 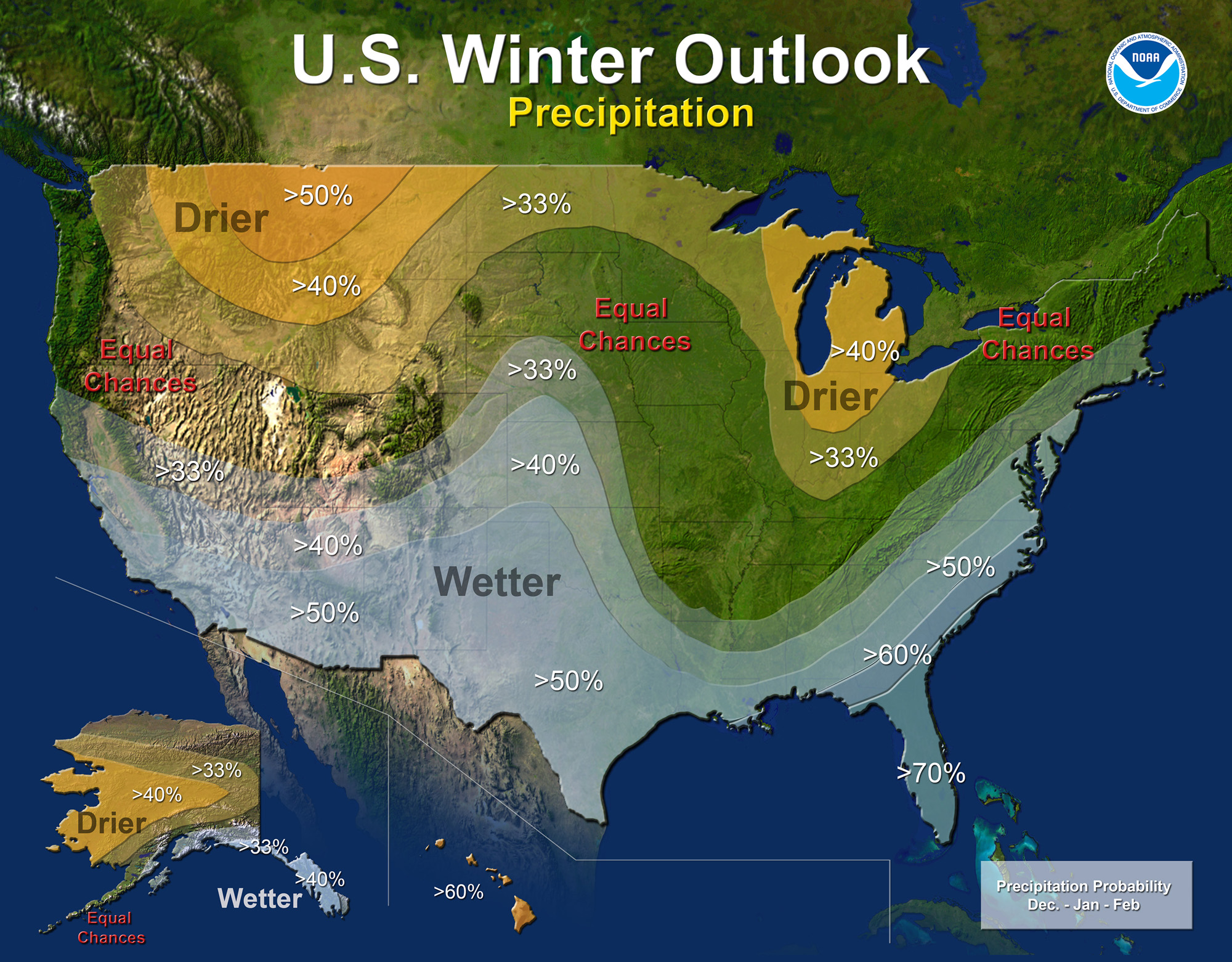 This goes in accordance with several dips in the jet stream, known as “Rossby waves”…which bring multiple cold fronts/ upper Lows from west to east, followed by cooler air masses down into the South and towards the East Coast/SE Region. When we have this negatively tilted (downward bulging) polar jet stream, we have warmer S/SW winds, or low level jets, pull up from the Gulf of Mexico ahead of cold fronts. With Sea Surface temps being so much cooler than the air during the winter, we encounter what is called “marine layering”, which causes “decoupling” issues at the surface with winds. In other words…warm air cannot mix over the cooler, stable waters.  This in turn keeps the S/SW’rly wind events on the lower end.  When lower resolution models predict moderate to strong winds…we usually end up seeing much lower-than-expected winds from those directions. With that said, Louisiana tends to show the higher amounts of rain, which tells us that these dips occur more frequently down into the Midwest to create heavier rain (and snow/ice) events down along the central Gulf States.

Conversely, when the cooler air masses move in behind these fronts, we see strong Northerly winds carve down the coast. This is known as the “cold air advection process”, where colder air sinks down over the warmer waters and accelerates parallel to or in between the warmer coastal land masses. 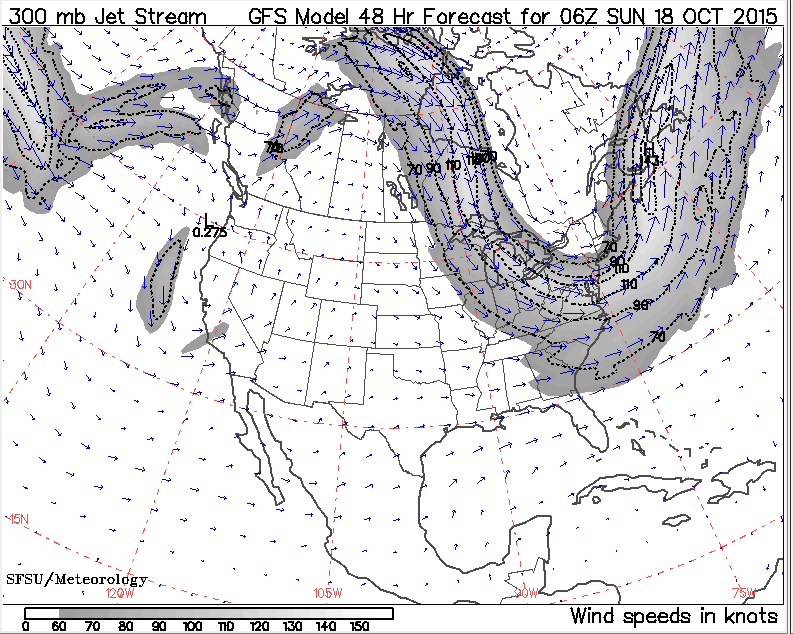 2.   With a sharp dipping of the jet stream into the Midwest and Deep South(cold and wintry weather for them), cold fronts weaken as they approach and fizzle out in the Southeast due to marine layer decoupling, but get some boost to the north of OBX on the upswing. Basically, the S/SW winds are weaker in the southeast and stronger as they head up north where low level jetting can force a stronger flow. But even there, we see marine layering having its issues as well. Low pressures tend to develop offshore and slide up the coast, which creates longer lasting rainy periods with variable wind fields and weaker gradients along northern FL/GA/SC and SENC. High pressures following them show West to NW winds briefly pulse to moderate levels in the SE Region before being lifted. Usually a day or two at the most.

Overall…the #2 setup creates an overall weaker wind setup for South East Coast. However, as we head further north, we tend to see weak SE coastal Low pressures pick up momentum while swinging northeast across OBX and heading towards Cape Cod/Maine – or further offshore. Winter events are triggered along these Nor’easters as wrap-around winds get the cooler bite from Canada – and there are many stronger, yet messy, NW/N’rly wind events as a result of the tightening gradients between Atlantic Lows and the Canadian Highs.

Ok so which one would I go with for this El Niño event?

Based on the latest NOAA discussion, I pick door #2 for a weaker overall wind pattern. Specifically, weaker overall Southerlies, average NE/ENE’rlies and weaker Westerlies. However, nothing is certain with a weaker wind pattern for us along the East Coast, though. We will be watching this closely to see just how similar it performs as compared to the past events. For research purposes and detailed analysis…we should be keeping track of mainly 3 sets of winds – I placed a blog link with each one for more details:

–  S/SW winds ahead of fronts – how much do they build from (baroclinic forcing) or how do they not build? Marine layer decoupling issues? At what temperature spread does marine layering/fog banking occur? What is the UP and DOWN pulse rate as a result? How are the upwind warmer land masses allowing instability for builds inside of the coastal breaks, sounds and bays? https://blog.weatherflow.com/marine-layering-effects-start-in-the-se-region/ and https://blog.weatherflow.com/drawing-a-line-in-the-water/

– NW/N/NE winds  – how fast do they build into a region or specific areas? How long and how strong do these last for? Are they a tighter and higher quality gradient wind? Cold air advection process – what is the criteria for the much cooler denser sinking air? Does it accelerate along the various land and sea interfaces? Backdoor Sea Breezing with cooler air/warmer land? https://blog.weatherflow.com/early-fall-noreasters-for-2014-record-low-temps-on-the-way/ and https://blog.weatherflow.com/backdoor-ene-sea-breezes-along-the-sc-coast/

– W/WNW winds – how often do High pressures build in from the west? How strong does this land originated wind become? Steam fog events? Quality of the wind? Do the lulls-to-gusts have a much higher spread around 10-15knots? 20kts?  Is the surface friction higher over inside bodies of water or offshore waters?https://blog.weatherflow.com/smoke-on-the-water-early-arctic-blast-to-the-se-region-shows-post-halloween-spooky-effects/

So…we have a big assignment to look forward as we swing from 2015 to 2016 during a very strong El Niño event.  Let’s see how things play out. One great thing to keep in mind is that we have more WeatherFlow coastal sensors now than ever to help record this climatic event. 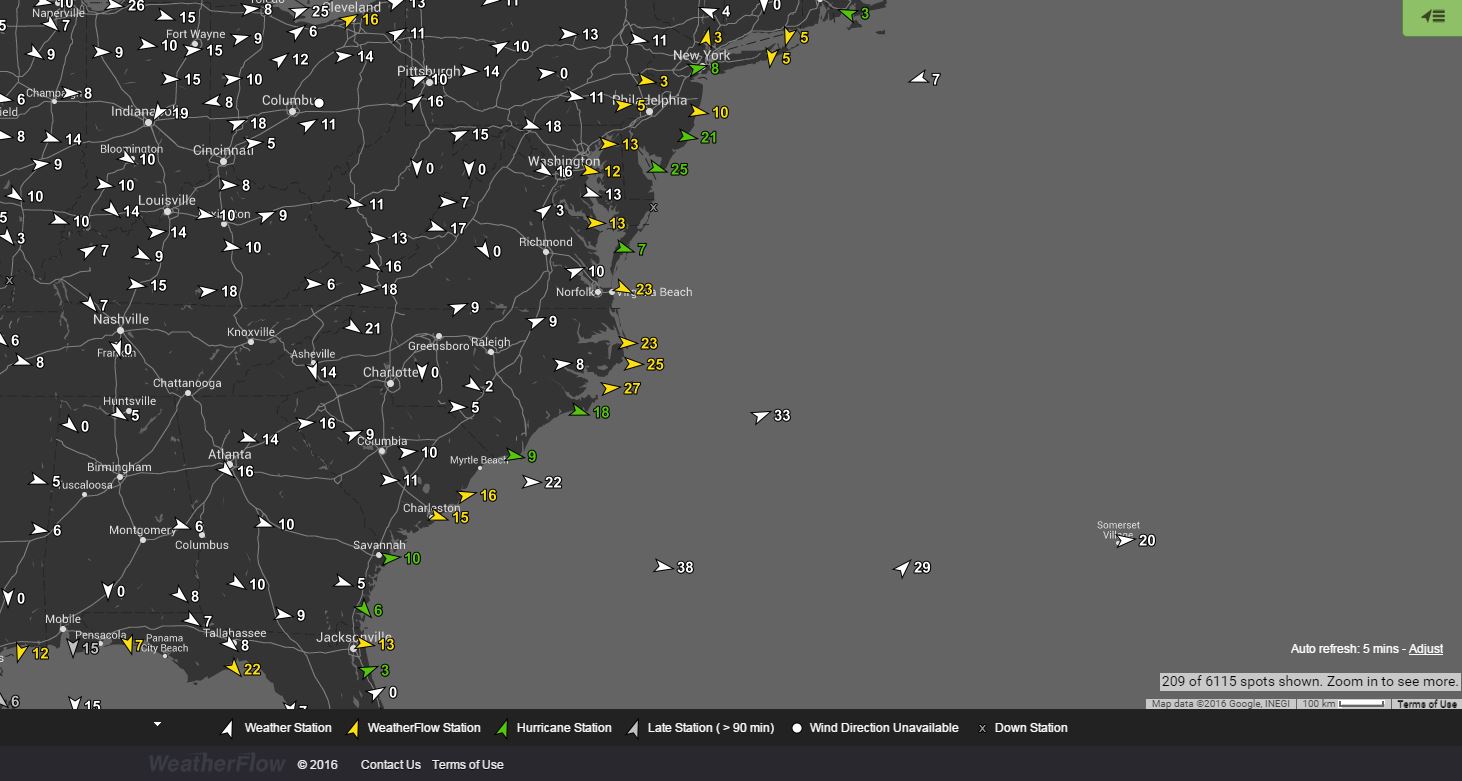 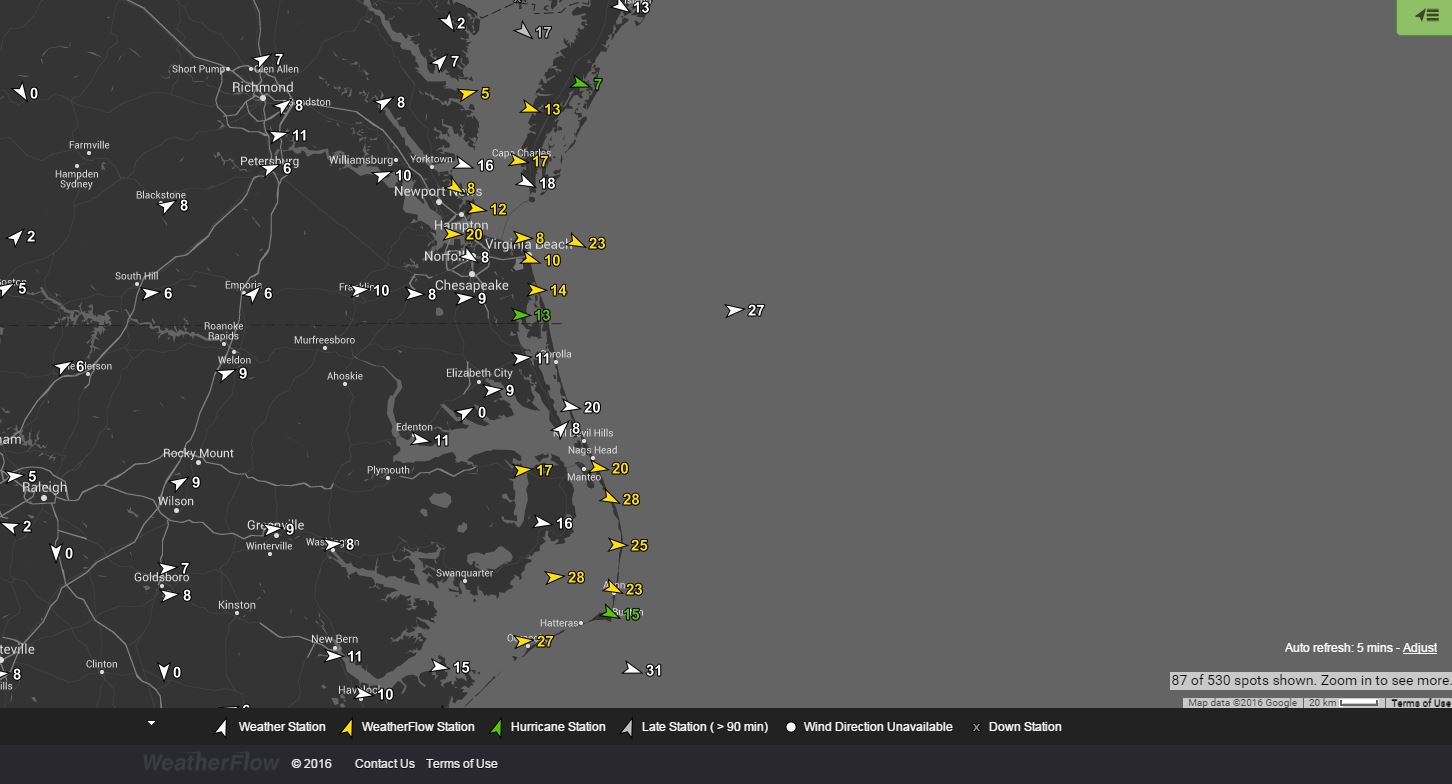